Irlina and Sarynae share a quiet moment discussing a book that Sari shared with her sister within the glades of Faerindell. (As a note: Sarynae speaks in ESL, Elnin sign language that is expressed in hand-signs, ear/tail positions, and facial expressions.)

Laying the blanket down between the bushels of foxgloves and lilacs, Irlina checked her picnic basket and made sure there was plenty to enjoy during her short break. The bees buzzed in the air as they moved from fairy shroud to fairy shroud and tickled her ears as they passed close by. Other than the muted sounds of nature, the glade was quiet. Settling down crisscross on blanket with her book of choice, Irlina opened up to her current chapter and started reading.

It wasn't long before a rustling sound came to her ears and the foxgloves started swaying as they were being pushed aside. Irlina looked up in time to see the slight stature of Sarynae show up over the flowers that surrounded her. She smiled and signed a greeting, moving slightly to the side to give Sari some space on the blanket. With ears perked and wide eyes, Sarynae inquired about the book Irlina was reading. How far are you in? How are you liking it?

The crimson faenin placed a bookmark carefully in place for a moment to free up her hands as she spoke so that she could sign as well. "I am loving it! You were right, it is quite an interesting twist. I'm only halfway through yet so no spoilers please." She reached into the basked and pulled out some small berry tarts. The local bakery had made them just that morning and Irlina had been tempted to pick up the whole batch! Offering three to Sari, she picked out three of her own and chomped down on the sweet crust.

Sari took the pastries with a Thank you, and bit into her own delicately. She enjoyed these moments when she had a chance to sit and hang out with her sister, especially in the beautiful gardens which were scattered all over Faerindell. Brushing the crumbs off her skirts, she turned to the faenin kittom and gestured towards the book. No spoilers, I agree, but which chapter are you on? She perked her ears curiously.

"I'm currently on the chapter where he meets the ancient dragon in the deep lair. Oh! and Aramina has performed the rite that opens up the passageway to the FaeRealm." Irlina emphasized her signs with ear twitches, tapping the book as she had a thought. "I wonder if that is anything like what the fae realms are really like?" Irlina looked curiously at her sister with an eyebrow raised. "I do like the idea of it but there some aspects I'd probably change. I mean... it seems a little too much like a dream, especially the trees that change colours depending on the season or temperature. I would find that quite confusing personally..." She observed the clouds drift across the sky for a moment before turning her gaze down to Sari who had just finished the last of her tarts. "How did you like it?"

Wrinkling her nose in thought, Sari ran her hand along some of the lilacs that hung from the tree which bent over them, shading them from the sun. I like the novelty of the seasons changing. It reminds me a little of when miasma raises and starts affecting the weather. Honestly, the fae realms sounds a lot like here, covered in flowers and trees, blossoms as far as the eye can see. It's very different than home. The pale kittom thought a little longer and then smiled wistfully. Though being able to fly like you can would be nice.

Irlina laughed in response, "Being big enough to carry you when I fly would be nice too!" The shorter kittom held out her hands to illustrate the size difference between them even though they were around the same age. "Can you imagine real dragons like that in the world though? Huge and monstrous, just like the ones in the book all ferocious and full of fire? Now that would be something amazing to see!" Gesturing expansively, she continued. "I bet you could fit whole families on those dragons. Go on adventures and find their treasure hoards..." She leaned back and looked up towards the sky lost in thought, "That would be so much fun..." she trailed off more to herself.

Sari shifted where she was sitting until she was next to her sister and nudged Irlina's shoulder with her own. I think I prefer Fimbrathyl's hoard of books rather than a pile of treasure and gold. She spelt out the dragon's name carefully before plunging on, Living in a library would be my idea of fun. A new book every day means a new adventure!

"Hah! You would think that." Irlina nudged back with a grin. "Little Miss Bookwyrm here..." She picked up the book again and glanced up at the sun's position through the fairy shrouds that danced in the wind adding, "Well, you are welcome to stick around but if I don't finish this chapter I'm gonna burst!" She felt the pale kittom shift again, and raised her arm so that Sarynae could lay her head in her lap.

Would you read it to me? Sari arched her eyebrows in a question as she looked up towards her sister.

Nodding, Irlina opened the book back up as the fragrant breeze picked up , carrying the smells of the floral cacophony that surrounded them. Nestled within the safety of foxgloves and lilac, the crimson faenin really did feel as if she lived within the fairy realms and the adventures she read about could be true. This moment felt absolutely magical. 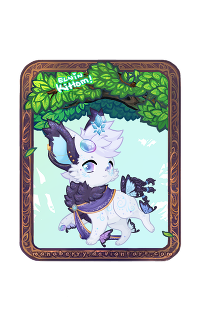 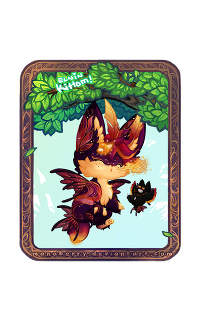