Louku has been tasked to clean her room before she can go out to play. Lets just say this story maaaay have been inspired by real events >_>

"But I don't wanna..." Louku flung her head back in despair as she let her shoulders drop in the surest sense of defeat. They had been cooped up in the house for what felt like forever and the bright shining rays of the sun were calling out to her. She looked over to the window where the golden trees waved invitingly towards her and sighed dramatically. "If I clean up now there will be no time before t' sun has set and we need t' come back inside." Louku deliberately did not look down where she knew  there was unfinished craft materials and other toys, puzzles and books, along with a few discarded outfits scattered around on the floor.

Malis crossed her arms and shook her head in dismay, long dreads clinking behind her. "Ya should have through about that before ya decided t' pull out so many things. I've been telling ya that you need t' put away what ya been workin' on before starting something new." She nudged a robe out of the way of the door before taking a peek behind it to find a stack of books tucked in the corner. "At least see about gettin' all t' stuff off the floor so no one gets injured." Or at least so the floor was visible, she added in her mind. Louku would be lucky if it took only until the weekend to clean up the room. Though she couldn't blame the kittom that much, they had been cooped up for the season, longer than normal this year due to the rains which was unusual for Bellmoril and it was difficult to keep the place spotless when there was no drive to put something away only to take it back out a few hours later. This was why she was willing to strike a deal.

Deal or no, Louku slumped her shoulders even harder, she knew even just the floor would take a few hours. She pondered for a moment about enlisting the help of her brother but knew he probably had his own room to deal with. At least she had a small closet... Her eyes slipped toward the closet door for a slight moment before darting away, hoping Malis didn't notice, her mind cooking up a plan. "Fiiiine..." She wailed in mock-defeat knowing she needed to get her mother to leave the room quickly so she could put this growing plan into effect. "I'll clean up the floor... but afterwards I can go out t' play?" It was then she allowed herself to glance up, a hopeful look shining within her eyes.

"Yup, ya get ya floor visible an' then ya can go out an get some fresh air with the sunflowers an' barley fields." Malis nodded, not fooled for a moment. She had been young once and knew exactly where this was going but figured it would be a great lesson for the little kit to learn. "If ya need any help, I'll be tackling the main livin' area. There is a brush in t' hallway; I believe Atal is almost done with it." With that she turned and headed out through the doorway. "Remember, make sure ya put things back in their place or they are gonna get broken or lost..." She left the threat hanging as she left the room, letting the door click behind her.

Louku was already not paying attention and had zipped toward the closet door, flinging it open with a thud. There wasn't much space in there any more, clothes were mostly hung up and the shelves were rather full, but there was some space in a few baskets, and with a little effort she cleared up some room on the closet floor. It was then she grabbed the book pile and shoved them onto one of the newly open shelves. The crafts went onto a few others, scattered around wherever she found space. The loose clothes from the floor ended up in the floor of the closet, and the games, toys, and puzzles followed them on top. It took a good half hour but she was pushing the closet door closed, using her whole body as leverage, until it clicked, and then brushed her hands off onto her skirt. She looked around proudly at the now cleared floor and nodded, ignoring the bookshelf with half the books toppled over and the doll house that was in even more disarray than her room once was. Louku didn't mind, it was now time to go run out into the summer sun, down through the forest with golden leaves, and into the pathways and roads that wove around fields of barley and wheat like the seams of a patchwork blanket.

She skittered forward, tossing the door to her room open, skipping over the brush that was leant in the wall in the hallway and burst into the warm sunlight of the afternoon. Golden leaves surrounded her as a stiff breeze glided them across the cobble pathway that lead enticingly out to the fields before her. Living on the edge of the forest, Louku usually loved to explore the dappled shadows of the birch trees and maples, but today the open expanse of possibilities called that much stronger. The wind picked up a little, causing her to shiver and the blue kittom considered hopping back inside to grab her cape but then she remembered her closet and thought better of it. Opening the door was something Future Louku needed to deal with, in the moment she was going to enjoy her time in the sun. 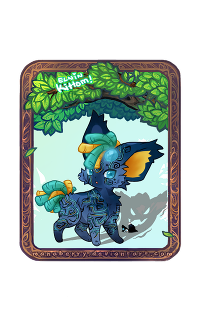