It was the third day of watching the sun rise through the floating islands. The long grasses tickled her legs as the faenin admired the view. She was on a small quest of discovery, this being her first time out of Ilrian unaccompanied by a chaperone. It was exciting, she was hoping to find some remote areas that might have new mysteries to discover. Rynn was a student still, she has not completed the necessary quests needed to attain the rank of an adult, but was hoping it would soon be time. She watched as the morning sun burned off the last of the mists that lingered along the lower parts of the cliff and looked up once again at the floating islands. One day, she thought to herself, I'm going to visit those islands.

Rynn stretched and stood up slowly, ready to start the next day of exploration. She was rather excited for this new hike because it promised to show some splendid views of all the best things Kyendi had to offer. The faenin started out, preparing for the long walk. She shouldered her backpack and packed up her things before realizing her necklace was missing. Without a moment's thought she called out to her pomu and hoped that the little sprite would have it in their shadow space. However, when Rynn looked around she realized her pomu was not there. Instead a small statue that looked suspiciously like her pomu sat in her shadow unmoving.

Concerned, Rynn looked around again for her pomu before picking up the statuette and examining it. The dark stone felt like obsidian and had a decent weight to it. She hefted it once or twice before placing it gently into her bags. The faenin had never heard of this happening to pomu and hoped it was not an affect of the area she was sleeping in. She took another look around the edge of the forest she had camped by, it seemed darker than it was before and a chill breeze made her shiver for a moment. Even the mists which had seemed light and airy now grew thick and clammy. Rynn picked up the last of her belongings into her pack a little faster, her heart beating just a little too fast.

There was a movement in the corner of her eye which made her gasp and turn slightly. The long grasses swayed as the wind picked up, the wild feeling of the forest reaching out to her. Amirynth twisted, trying to catch what had put her on edge before she noticed her shadow had vanished completely. The odd feeling grew as she stared at her feet in amazement, her train of thought shattered for a moment with the discovery. It did nothing to help her feel better and the once brilliant and beautiful forest she had trekked through now seemed uninviting and mysterious. She backed away a few steps before remembering the cliff edge where she had been gazing out at the floating islands just a few minutes before. Facing the forest edge again she took a deep breath. Some how she needed to get back to Ilrian, to safety, to the other elnin she was staying with. Rynn took a few steps forward and let the mists envelope her.

She couldn't see before her very well, peering through the thick fog and around the tight undergrowth of the forest. Her heart beat heavy in her chest and she took her travel slowly, ears pricked for the slightest movement. Each crack of broken twig sent her jumping, each seed dropping from the tree tops set her heart a-flutter once more. She could see the other side barely through the gaps in the trees, the colourful markers showing up faintly through the mists.

And then her sight went black.

It was so sudden she hardly had enough time to gasp or feel the pain of the claws reaching for her. A sharp agony flashed across her face and into her shoulder. She ran, ran so fast and far to get out of the shadows and the mists that had surrounded her. She wished she had her pomu with her. She wished she had at least -someone- with her. Amirynth felt her feet pound onto the dirt, trying to scramble over the thick roots and push through thick tree trunks. She winced as she tried to open her eyes, trying to glimpse where the far edge f the forest was that would lead the the path back to the village on the edge of town. As long as she got there she would be safe. Her mind imagined the beast that had attacked her, trying to figure out where it had come from and failing. She could feel her strength ebbing away as the adrenaline started wearing off.

It was growing dark once more... she didn't know if she would make it... 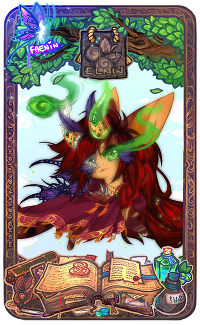