Region Affinity Reward:
For Elnin: ELN1165 You have earned 1 AP for Region: Silveil

It had been a long travel through the bright lights and excitement of the main city of Silveil. Ametrine stretched his arms up high in the small transportation cart that had brought him to the city from Belmoril where he worked as an apprentice at the bakery. He had a goal to visit Astraea who had been studying the certain jellyfish who inhabited the depths of the area. In contrast to Belmoril, this place was a calaphony of sounds, lights and colours. Staring through the window of the carriage, the kittom had watched as the glowing lights proclaimed both dance and showtimes, activities of all types, and more interesting things you could spend your time doing if you were of like mind. Most things he was not interested in, or were lost on his younger mind, but the bright, magical lights soon dissolved into luminous, natural ones. Past the outskirts of the main city, and across to the edges of the Starlake, Ameh soon found himself enveloped by darkness, punctuated by the dancing flicker of insects and jellyfish as the dark ripple of the lake now surrounded his window to the right. The going got a little slower as the carriage took its time winding around the small trail, the forest on one side, the deeps waters on the other.

Ametrine let his mind wander as the dark lake gloomed beside him. It had been a while since he has seen Astra, she was always so busy with her studies. She wanted to learn magic, the powerful kind of myths and legends. While he was sure that was just a dream, the care and attention she gave to many different flora and fauna of the different zones of the known world could prove otherwise. Ameh though, preferred the simpler tasks of life and enjoyed his time learning baking and cake decorating while under Talia's tuition. In fact, he had a small package of honeycakes, something of Talia's specialty, as a gift from his home. He patted the pouch absentmindedly as his gaze wandered, thoughts far away. The kittom hoped Astra would like the delicious honeycakes, they were his best batch yet and he was very proud of them.

A lurch of the carriage woke him up from his thoughts. Ameh looked out and realized they had traveled beyond the curve of the lake and the great tree was hilighted by the frame of the carriage as they were about to turn away from the lake path and down into the shadowy depths of the wilder parts of Silveil. It was early enough in the season, and close enough to the city itself, that the lake was not so dangerous but Ameh knew that the outskirts was a different story. He had already packed a plethora of games in his bags and had a season's worth of news to share. He would also be helping Astraea with her plants as they were cared for inside rather than allowed to grow freely. He was almost at the end of his journey and was grateful to the Elnin who was driving the carriage for allowing him to nestle in with the other packages and parcels of the last shipment of the season to this outer village of Silveil.

The Starlake and the tree dropped out of sight and the darkness of the forest surrounded them. He looked out over the star-lit nooks and crannies, watching the glimmers of light dance and almost follow their movements showing a curiosity. Ametrine wasn't sure if they had thoughts of curiosity or wonder but he made a point to ask Astraea when he had a moment to find out if she knew. He was now feeling the excitement of almost completing his journey and felt the jitter of being in the seat for so long. The kittom was sure the next rise would be the last and was delighted to find out he was correct when the soft, magical torchlight emerged from the constant night of the forest. Ameh's heart fluttered a few times as his excitement grew a little more followed with a bit of nervousness. It had been a while since they had spoke and he had grown fond of the letters sent back and forth. They would be spending the next season in the same place and he hoped the experience would be good for their friendship. He took a few deep breaths and straightened his necktie and vest. Wishing he had a mirror, the kittom ran a paw through his hair and tried to smooth it down. He was sure it would have gotten tousled during the journey, especially with how often he had napped, but he hoped he looked at least somewhat presentable.

As they got ever closer to the village, Ametrine decided to distract himself by thinking upon the activities to come during the winter season. He had brought some games, both card and board games, as well as a few new books from the series he had been reading with Astraea. He had even stashed a surprise in one of the books as he had managed to get one signed by the author! The kittom had also brought some notes and papers outlining recipes he had been learning and fine-tuning. While he was artistic enough to decorate a cake, Astra was very good at art and he hoped that maybe they could collaborate on a cake and pastry book together... or at least a short guidebook he could share out. He had already collected notes from Talia, it was the organization and the finalizing that he needed the most help with. Then there was Astraea's projects and studies. He knew she needed help with the plants and animals that would be taken in from the heaviest parts of the season. Most of the prep work would have already been done but there was still a lot of work to be done every morning to make sure everything was cared for properly. It was then he hope he could ask Astraea questions about the glowing jellyfish, her field of study. They didn't reside in Belmoril and he found them fascinating. It was then he noticed that not only was he still surrounded by the light illumination of jellyfish, but he was also surrounded by the village.

"Ameh!! Over here!!" A purple kittom hopped around waving a paw in the air, her dungarees spotted with splashes of paint and dyes collected from the plants and flowers that grew around. "Welcome to Yarrow!! I'm so happy you could finally make it!!" The bouncy kit jumped from foot to foot as she waited for the carriage to finally stop and the driver to climb down and start unloading the packages. Other Elnin came around to find what was theirs before heading right back in. While the darkest season hadn't quite started yet it was heavy enough to warrant staying inside as much as possible.

"Greetings Astraea, it is nice to see you. One moment, I need to grab my bags." Ametrine turned back to his packs and moved to pick them up when he was lightly pushed aside by the exuberant purple kittom. "Oh! Be careful!"

Astraea grinned as she pulled down the two bags, leaving the smaller one by Ameh "It's cool, I gotcha!" She turned and with one motion stowed both bags on her shoulders. "These are nothing compared to the Vines we carry in. Go ahead and grab that small one and I'll show you to your room. We've had an exciting few months, I can't wait to tell you all about it!" She continued to chat as she lead Ametrine, slightly bemused, to his new home for the season. It looked like it would be a very interesting time indeed! 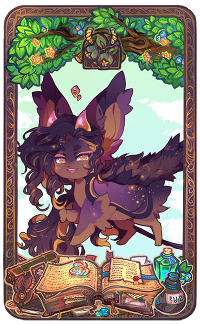