Ripples of color danced in the darkness behind her eyes, forming slowly into shapes. The feeling that mist or cold fog surrounded her caused her to open her eyes and she shuddered. Before her lay the crescent-shaped pool of water, but it was darkened. Where earlier she could easily see the other islands nearby, they were blotted by a thick fog now. Darkness surrounded her and she shivered in the cold, her eyes blinking wildly to adjust to the new lack of light. Suddenly, a movement attracted her attention and with apprehension, she turned to stare at the shadows of the rock outcropping she'd noticed earlier. From a crevice, something had squeezed its way out between them. The fur on the back of her neck pulsed and shot up while a creeping fear shivered down her spine. It's just a shadow, a trick of this mist. She thought, trying to pull her eyes away.

The dark visage slowly moved away from the protection of the rocks. Two large, steely blue eyes stared back from a blackened body. Spritz stared at the body that looked to be in a state of twitching, never quite standing still as it approached her, standing directly across the pool as her. With eyes unblinking, it cocked its head while the body seemingly danced apart from normal movement. Frost might have been growing up her back at the chill in the air, but the young kittom was frozen to the spot in disbelief of the creature in front of her.

Silence was unbearable. She wanted to look away from it but felt compelled by the strangeness of the shape to continue to stare. As if sensing her thoughts on the matter, the mysterious figure twisted its body around, turning around and looking back. "Do̞͞ ̪̏yo̹͊ȗ̘ ̻̑l̙̃i͙͒kė̫ ̲̈wḥ͡aẗ̥ ̱̓ỹ͖o̡͞u̮͑ s̠̈ẻ̦e̞͐?" The kittom's claws curled tightly to the blanket she was on in shock as the warbled voice danced in her head. However warped it sounded, almost like listening through a long cave where many voices chatted at once, there was a distinctness to the baseline of the voice. Her voice.

"Sur̗̀pr̡̆i̒͜s̳̊ȩ͊d?͎́ You ́͜sh̺͋ou͚͂ldn͇͠'̖͝t be. ̏͜L̤̑ó̬ȏ͈k w͇̆he͛ͅrè͇ ̖̿we̢͠ ar̊͢e." Spritz felt sick as the voice rattled in her head. "That can't be... real. This isn't real. I must have fallen asleep here." Quivering, her voice pittered out but her bright blue eyes focused on those that stared back with indignance. The shadow elnin moved, showing off a familiar three-tails behind it. As if with every passing movement, it mocked her. Twisting its body like her and mimicking her movements, as if to show off the likeness. The kittom refused to move, taking the strange creature to be an apparition or a fae creature delighting in her torment. The other shook its head. "You ̦͊fa̹̎ỉ̼l ̗́t̨̽o ͈̚ú̩nd̩͗er͖͂s̱͛t͌ͅà͓nd̪͗.̻͑ ̠̅Whỳ̩?͍̿" It moved closer, leaning over the water to stare back, now wearing a bright, white, catlike-grin, tilting its head one way and the other.

"Y-you're a ghost. An apparition. Maybe one of the fae or... something worse. I don't have anything..." Her voice cracked. "Nothing you would want." Caustically, the rippling shadow laughed. "I am n̪͒o͙͡ ̬́ap͘ͅpa̳̽ri̯̅t̠͆iò͔n̪̆.͓̕ ͆͟. Lo͙̾ŏ̯k͈̋ mo̾ͅr̰̃e̗̍ c̳͌l͕̉ŏ̼se͈̿ly, ̰̌wh͉̆aţ̀ à̪m I? ̲͂Or ř̗ath̠̃e̖͝r, ̼̓w̏ͅh̯͆ò̥?̫̎" The haunting voice echoed deep inside of her ears, reminding her of the roar from before and she stared back. It was the twitchiness of the body that disturbed her, like an image that was distorted somehow. "There's no... other explanation..." She started to speak, but her voice caught in her throat and cracked loudly, like a lightning strike down into her soul.

Everything in her body wanted to ignore it. From the deep recesses in her mind that were ignoring what it looked like from the beginning. What she looked like. Now she had to stare again at the shadow, staring as the darkness seeped into the pool underneath, dripping down into it. Words formed at the edges of her mind but failed to properly form. Steely eyes glared back at her. "T̹͊herḝ ̮̚i͙͝t̘͡ iṡ͚,͎͊ th̦͡at fė̙ar̰̋.̳͌ Do ỹ̳oṳ̓ s̈́͢t̢͆i͓͛ll d͖͊eny wh̄͟aẗ̙ yő͉u kn̥͊ow̰̃ i͈̾ṡ̱ truḙ̍?" Another moment of eerie silence. A tension spun so tightly she might snap from it. The cat-like grin was an insult, but deep down the cold was as apparent as ever.

Her eyes slowly locked onto the shadow's glare. "You're not twitching. It's a ripple, like a reflection on the water." She dropped her eyes back to the pool. "Maybe even from this pool." Dryness filled her mouth and she shook her head again, looking back. "But that's not... what I am. What you are. How you look." The sharpness of the piercing laugh made her flinch and the shadow stood as tall as it could to stare back at her.

The shadow lept at her and stood over the water, floating on top while it bared its sharp fangs, the face twisting to that of a great beast. The three tails were sharp like knives and raised above, threatening to stab over the body and into her. "N͍̊o̥͡w̜̕,̥͞ ̣͛w̞̾hat̡́ ͇͡w̼͡i̟͘ll you̠̿ ̮̊d̺͛o̥͘?͕̽" Spritz froze in place, eyes affixed at the monster and she cowered.

Bellowing in her ears, the voice reverberated down to her core. Her little tails shivered and she clenched her eyes shut. My... fear...? Doubt? The words were haunting, but despite the sharpness of tone, the truth did not change. The discoveries during her journey were just of that. How she doubted herself at times, her decisions never quite backed. The hesitation at the bridge. The avoidance of heights. So often she had spent fearful nights on the side of the road, feeling that she was going nowhere and maybe was wrong in leaving. Every moment of every day, the noise filling her ears was driving her onward to push away from the sound. What if... the sound... what if it wasn't a calling coming from somewhere. What if...
"I wanted to see you." She said, more resolute and she opened her eyes to stare and the shadow hanging over her. "Face you." Spritz shook her head, standing back up to the height of her doppelganger. "The call wasn't ever to avoid the sound... this whole time..." She smiled, feeling foolish for wasting all that time. "It was to face it, the uncertainty inside of me after spending so much time without growing." A moment passed between them. "I understand now." Defiantly, she took a step forward.

"There's no way to grow when you stay put. I was letting you grow, letting you fester by not challenging myself. Those parts of me do exist." Her eyes narrowed and she pushed against the shadow, who had stepped back, slowly sinking down into the water, frantically trying to keep hold. "Y̡͂ou͍̓ ̱͝c̥̋â̺n͗͢'t!" Spritz gave a knowing smile. "I can. I accept that you're here now. That I'm here now. With doubts, with fears, and uncertainty. Things aren't always going my way, but I think I know that if I at least try I can handle it!" There was another step and the shadow fell deeper into the water, clutching to the edge, looking frightened and dripping like ink back from where it came. Spritz moved down and smiled. "You are not all there is... but I'll be seeing you around." Lightly, she tapped where the nose would be and the shadow faded with a gurgled cry.

Spritz let out a sigh of relief, sitting back on the small blanket. From above, a ray of light hit the moon-shaped pool again and sent a rainbow of color moving out of it. The mist swirled, sparkling with colors before it faded completely. A small splash noise drew her attention and she noticed a small, fairy-like creature over the water, gently bowing while glowing in the same pastel colors of herself. A soft gasp escaped the tiny creature and it flew around Spritz in a circle before dashing off into the world.

Again the warmth filled her from nose to tails and she closed her eyes, feeling a wave of relief wash over her body. It was as if she was slipping into a happy nap. "I am... me." She said quietly. A rush of wind pressed against her fur and she opened her eyes again.

For real, this time. The bright sun above still shone down on her and her position hadn't changed. Whatever she saw had been entirely in her own mind and she blinked back the confusion but smiled with a knowing look at the pond. Who was to say what sort of things were reality? Spritz brought herself here, to this pool, for a reason, though unknown to her at the time. With the wind rustling through her fur, she looked back at the nearby waterfalls and grinned brightly, a new spark in her eyes.

In her life, so many things were going to be uncertain. The only certainty in life was the unpredictability of things to come. On the islands, there were no opportunities for challenges of this magnitude. Nothing to properly prepare her for the bigger world. Spritz was still Spritz, but maybe a little wiser and, dare she say, a little more mature. The young kittom felt at ease, sitting in her little paradise on her blanket, with the wonder of the world before her with a bright future ahead.


"Whatever happens, I can handle it." She commented. 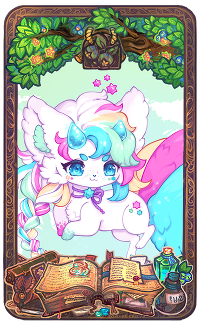