Wick paid the sky very little mind as he weaved through the foliage just outside of a village in the mountains of Kyendi. The sun would set soon but the tree tops in this region blocked out enough sunlight in areas that the forest floor quickly was growing darker faster than expected. A handful of paw steps behind Wick was Mallow, the unfortunate victim of his wild ideas. This time was no different. With winter not far off Wick had set himself to the arduous task of catching a ghost.

Mallow had asked why Wick was so suddenly driven to do this now but in return only received an earful from Wick that he wanted to prove he was not scared of them. What better way to do that then catch one, of course? And it had to be done before they were cooped up inside for the winter. Mallow also suspected though that his friend wanted to gloat a bit but said nothing. Finding an abandoned haven Wick had heard about he entered it with confidence. “This will be our camp.” The words came out muffled as he rummaged through a pile of old worn out supplies. Usually havens were well kept but this one must have been off the traveled paths for a while or perhaps, Wick thought, it could be haunted. Mallow attempted once or twice to mention that there were likely more fey than ghosts in the area but Wick was on a mission.

“Just look at this place. There’s moss growing on the walls and a bunch of unused candles. A few cobwebs too but we can clean those up. It’s perfect.” Wick insisted but Mallow wasn’t convinced. “We couldn’t have just hunted for ghosts somewhere….warmer and dryer?” Mallow inquired but was met with resistance. “There’s wards back in town. What if the ghosts are scared off? We can’t catch one if they aren’t there.” Wick concluded, turning as Mallow buried their face in their paws. “And no place is really dry here.” Wick continued to explain. ”Even my relative’s house is damp.” The kittom observed. Though if they were closer to a waterfall in Kyendi the humidity would have been worse for what was to come.

Wick got to work starting a fire in the pit. Distracted every so often by the loose soil beneath his paws and the bits of mountain rock that he unearthed when he moved them. The stones were a good sign. They lined the fire pit. Getting the twigs to burn was the hard part though because they were not very dry either. “We can try a candle?” Mallow suggested, dragging a few over. Wick managed to light one and they carefully tipped it to light two more. Wick looked like he might have been starting to regret his decision though. Now that the forest’s edge was darker he thought he heard whispering, not really thinking of some of the fey folk’s love for pranks and mischief.

Wick had laid his trap as well, a jar with a sweet piece of candy inside. Just as they were hunkering down to sleep on their small camping kyendi excursion Mallow’s tired eyes thought they saw a candle flicker a bit more than the others. “Did you see that?” He asked Wick who shook his head until he looked back at the candles. In a flame a small face grinned from it before all three candles snuffed out. It was so unsettling both kittoms hightailed it home, tripping over their paws. It was a good thing the islands were above them or they may have run the risk of falling off an edge. Here at least once they got to the short path back into the heart of town they would be alright. They toppled through the door way and huddled together in Wick’s room until Bazil returned.

Wick was disappointed in his own cowardice but there was always next year to grow braver. He would use winter to plan and eventually such happenings wouldn’t startle him so much. Around this time of year though it seemed like the fey folk resurfaced a bit more often or maybe it was just that Wick was so enamored by the stories he was more attentive about the odd occurrences. Either way this meant staying inside would come sooner too. Outside a fog hung in the air from the humidity that cause the kittoms to shiver with a chill when they had gotten inside.

Mallow would have suggested they use the time doing something more useful like gathering interesting herbs from the forest but for an ambitious kittom like Wick that never would have been a satisfying seasonal activity. Wick could see the almost wistful expression on Mallow’s face as he knew the kittom was thinking about plants. Maybe next year they could…try something a bit easier, but it wouldn’t be because he was scared of ghosts or anything. 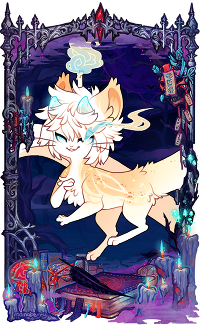