9 EC (6 for submission and 2 for over 900 words, and 1 for Pomu Lantern Description)
1 AP for Regional affinity

Let me know if there's any issues! This kind of played off my previous prompt of [M-061] Close Comforts, sort of expanding upon it a bit more, I hope that's okay!

Naida stood on the beach, the soft glow of her Pomu Lantern illuminating her surroundings. The lantern, in the shape of a small crystal, was a reminder of her dear companion Marinus, who was currently in his hibernating form. She missed him dearly, but she knew he would return to her in due time. In the meantime, she would make the most of her time alone.

Previously Naida had spent hours carefully crafting the Pomu Lantern. The ‘Siren’s Blossom’ added a soft glow and reflected its azure petals when touched by moonlight. Keeping to her oceanic theming, she added trails of glowing seaweed, dangling off the corners of the lantern. Occasionally Naida adds in various other ornaments, like seashells or pearls that she finds on her beach-walks, a reminder of the activity she often performed with Marinus. She swapped out the ribbon of shimmering silk that tethered the lantern to her tail, with a length of pink string to better match her ensemble.

Naida held the lantern up to the sky, admiring the way the light danced and sparkled on the water. She missed the days when Marinus would walk by her side, attempting to catch fish for her to eat, although due to his size, it wasn’t very effective. Still, she appreciated the effort he went through to keep her happy.

Naida had to learn to adapt and find new ways to enjoy the activities they used to do together. With her lantern in hand, she walked along the shoreline, searching for shells and other treasures the sea had washed up on the beach. As she walked, she remembered the first time she and Marinus had come to this beach. They had been inseparable, exploring every inch of the shore together. Naida couldn't help but smile at the memories of Marinus chasing after seagulls and diving into the water after schools of fish. But now, with her Pomu Lantern by her side, she found new ways to explore and appreciate the beauty of the beach.

The soft light of the lantern cast a warm glow on the shells and rocks, revealing colors and textures she had never noticed before. It was a peaceful and meditative experience, one that she had come to treasure during Marinus' hibernation. She collected a small pile of shells, each one unique and beautiful in its own way, swapping some of the shells on his lanterns out with newer ones of various colors.

While roaming the beach, Naida sees a group of elnin gathered around a campfire. They wave her over and she joins them, happy for the company. They introduce themselves and Naida tells them about Marinus and how she's using the lantern to appreciate the beauty of the night. The other elnin are fascinated and ask to see the lantern. Naida holds it up for them to see and they all ooh and ah at the beauty of it. Naida stays with the group for a while, talking and laughing, and she realizes that even though Marinus isn't there with her in physical form, she still feels his presence through the lantern.

As the sun began to set, Naida made her way back to her cave. She carefully placed the shells in a small alcove, creating a makeshift display for her treasures. She set the Pomu Lantern on a nearby rock, casting a soft light on her new collection. She may not have Marinus by her side, but with her Pomu Lantern, she was never truly alone.

As the night grows darker, Naida picks out a book from her study, and begins to read. Naida has always enjoyed reading, but the dim light of her cave made it difficult to read at night. With the Pomu Lantern, she is able to light up her reading corner and enjoy her books in the warm glow of Marinus' light. The light from the pomu lantern casts a warm glow on the pages, making it easy for her to read despite the setting sun. The gentle light allows her to read for hours without straining her eyes. It also creates a cozy atmosphere, like that of hearth and home, making her feel safe and content in her cave. She becomes so engrossed in her book that she doesn't even notice the time passing quickly.

As a draft blows in, Naida shivers from the sudden chill. The ocean breeze providing a cooler draft at night, compared to the warmth during the day. She wraps a blanket around her shoulders and continues reading. She can't help but think about how much more cozy it would be if Marinus was there to keep her warm, but she reminds herself that this is a special time, a time to appreciate the beauty of the lantern and the light it provides.

Eventually, Naida sets the book down and gets up to go to her place of rest, the lantern's light following her as she moves. She sees the shadows dance on the walls, created by the light shining through the intricate patterns of Marinus' decorated anima crystal. Naida makes her way over to her cozy nest in the corner of the cave. The nest, made up of blankets and pillows, is where she and Marinus would snuggle up and watch the flames dance in the fireplace.

As she settles into her nest, Naida reaches out to adjust the Pomu Lantern, making sure the light is just right for her before she drifts off to sleep. The Pomu Lantern is more than just a source of light for Naida. It is a companion, a source of comfort and a reminder of the dear friend she holds dear. She is grateful for the light it brings to her life, both literally and metaphorically. She knows that when Marinus returns, they would have new stories and memories to share, and new ways to explore and appreciate their beloved Palu'au Islands together. 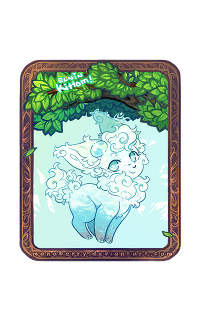