Let’s be honest: Enking was not a good person. He had only been at the academy in Ilrian for a couple of moons, yet was already well aware that every colleague and professor would be hard-pressed to find one positive trait about him. When the invitations for the masquerade were received, Enking couldn’t help but express a characteristic disdain for the event, with many relieved to hear the grump wouldn’t be in attendance.

Their relief was short-lived.

Astraea, a student whose optimism was always relentless, had struck up a conversation with Enking after class. “You should go as one of those old-fashioned Kyendi noblemen!” Her smile was wide and reached her bright green eyes, even as Enking cautiously raised a brow in response. Why was this elnin talking to him, again?

“Your tail’s so long, you already look like you’re wearing one of their fancy pelts. All you’d need is a nice robe and sash to go with it. You’d be like,” she paused to giggle, “y’know, like a king! Get it?”

Normally, the opinions of others mattered little to him – especially one featuring a pun, of all things – but the idea caught hold of Enking’s attention. If an evening had to be spent mingling with others in some sort of generic social bonding activity, why not be the best-dressed one there?

And so, for the first time since arriving in Ilrian, Enking left the safety of the academy’s walls in search of a tailor.

The light of the afternoon sun shone down through the wild, twisting boughs of the trees overhead. Enking squinted in discomfort. The miasma wasn’t especially thick today, but the young man was still sensitive to its influences after the… shall we say, incident. His hand, decorated in delicate Ahzan patterns with mehndi, unconsciously brushed away a loose lock of hair from his temple. It continued moving awkwardly as the strands fell away, having been used to much longer ones in the past.

It’s growing, Enking thought idly to himself while strolling down the path away from the academy, working his way towards the neighboring cluster of small shops and cottages. How long until they notice?

While Enking’s mind would have loved nothing more than to dive deep down that particular spiral of anxiety, the sights and sounds of the approaching town managed to keep him sufficiently distracted. He had only seen the rooftops from the academy, with their quaint thatched exteriors and off-white façades. The air here sang with the flow of a river that ran alongside its well-traveled streets, out towards the edge of the floating island where it would fall back to Eyre in a torrential rush. Enking’s gaze traced the path of the river as it touched the horizon and, far in the distance, caught a glance of Kyendi’s eldertree. He had never been to Bejali as a kit, but idly wondered whether a trip to see the massive weeping willow at Eiloen could be arranged.

Once in the heart of Ilrian, birdsong mingled with the eager shouts of children peering at the colorful, ornate fabrics of the costumes put on display outside the shop fronts with pride. It was peacefully, unsettlingly idyllic, with everyone’s excitement for the upcoming masquerade almost palpable. Enking shuddered, quite unused to the throngs of elnin surrounding him. The outskirts of Devara had always been comfortably empty.

Now, the question emerged: What exactly should I wear? The city was overflowing with options, from traditional Kyendi garb to exotic garments from far-away lands. Enking had a very specific idea in mind – to find not the most luxurious or valuable robes available, but the most authentic. Anyone could spend coin; Enking wanted to stand out from the crowd by parading his exquisite taste in front of the other attendees. Of course, Enking knew naught of traditional Kyendi culture, so appearing an expert was going to be… tricky. He could hardly read the shop signs, much less tell a traditional kimono from a yukata.

After a bell of fruitless searching up and down the thoroughfares, Enking resorted to a more familiar tactic – people watching. The tourists staying at kitschy budget inns gravitated towards the main thoroughfare with its gaudy fabrics in the store fronts, while those native to the city tended to converge in the older districts of town. Here, the smallest, most run-down shops tucked out of sight were bustling with groups of eager, outgoing patrons, all of whom knew one another. Enking recognized the camaraderie from similar places in Ahza and, begrudgingly, felt a pang of nostalgia.

Enking paced the tight alleyways, eyes glancing over the storefronts until–

A battered sign, barely hanging onto its hooks, indicated a tailor. Many of the pieces on display were simple, certainly nothing to show off to the echelons of society. However, hidden off to the side was a mannequin dressed in a robe of gorgeous silk, with patterns reminiscent of Kyendi’s many rivers stitched into the billowing sleeves. The sash was a striking gold – Enking’s favorite – and made with impeccable craftsmanship. Enking couldn’t tell much about its authenticity, but that mattered little. He was smitten.

“いらっしゃいませ！” An elderly elnin, one with quiet eyes and deft hands, finished a stitch with precision and peered up at Enking, who had just entered the shop. “お手伝いしましょうか？”

“Welcome! How may I help you?”

The conversation was a struggle, but Enking soon found himself standing in front of a mirror wrapped in silken robes. There were so many layers that the dread of keeping track of them all, the intricacies of tying each knot and sash, slowly began to settle upon him. Still, Enking was enamoured with the outfit as a whole. The gentle, azure blues of the robe paired perfectly to Enking’s anima, with the tail wrapped around his shoulder indeed resembling a regal pelt from a bygone era. Still, the shopkeep’s brow furrowed in frustration while gazing at his gracious client, as if something were amiss...

“そうだよ！” whispered the tailor to himself, rising from the floor after finishing a hem with a flourishing gesture. “こちらへお待ち下さい。” He disappeared into the back rooms without giving Enking time to decipher the shopkeep’s words. An almost comical chorus of crashes rang throughout the shop, while Enking was left standing awkwardly in silence.

Should he go help? Wouldn’t it be socially unacceptable to do nothing while the elderly man clearly struggled? or would that be rude, barging into an area that was clearly off-limits to the public? Enking was certainly not a master of etiquette. “Um, excus– er, すみませんー”

Enking breathed a sigh of relief as the shopkeep, eyes bright in their excitement, emerged holding an old, but oddly ornate box. “これは父親の面頬でございました、” the tailor explained while carefully removing the lid.

“This was my father's mask.”

There, lying ceremoniously in a pile of silks, was a half-mask made of wrought iron, its edges delicately rusted with time. Enking’s eyes couldn’t help but widen as they traced the bold lines that formed the design on its front: a grinning mouth with violent tusks emerging from either side.

“珍しくて、怖い面頬でございますね？” The elderly elnin explained that the mask was styled after those worn by the soldiers of Kyendi’s past, many of whom constituted the feudal nobility. Any man trying to fit the part of an ancient king would certainly need one, especially for a masquerade. Of course, only a handful of words were caught by Enking, though the sales pitch was hardly necessary.

“It's a rare, scary-looking mask, don't you think?” 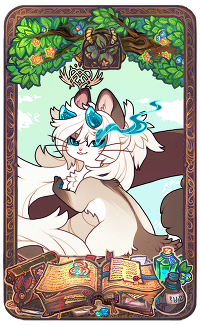