No one should accept a challenge from Tansy.
Completion reward (1065 words): 2EC
Elnin: Tansy
2nd Elnin: Oneiroi + his pomu! (1EC)
No Regional, thanks!

She had made fast friends, again, during her time wandering the faire-grounds set up in the middle of the small Silveilan town that she had been taken to by one of her mother's friends. How couldn't have she, for he was a glowing beacon in the ever-night, fluorescent green and blues, with what appeared to be a pomu on his head wearing a hat.

Well, no, it was a mushroom, but that's still so cool, isn't it? She would have to find a little trinket to give to Solanine, to make her little pomu just as dapper as this one, she lamented as they introduced themselves.

His name was Oneiroi, and he seemed to be some kind of apothecary in the making, (or just really interested in mushrooms,) and that made her all the more keen to befriend him - it reminded him of the 'red mage' friend that mom had. Regardless.

"I just had the best idea," had started the very bad idea, but she hoped he'd play along at the time, "so there's a cauldron over there on the abandoned stage, and I feel like everyone's ignoring what fun that could be." She murmured thoughtfully, seeing two sets of eyes light up, as if forming what could be the same idea that she had.

"Go on.." he continued, looking down their light of sight at said cauldron, bubbling with what was possibly just some juice, or punch.

"Ten minutes to run around and find the best things to make that cauldron sing, give it a little flavour and excitement. Then we get together and start putting things in and see how far we can get." She passed to him, a flicker of amusement showing on her face.

"Deal," he stated, after a moment of thinking, before they shook a paw on it, and off they went - separate ways full of excitement and general kittom tomfoolery.

Iroi was the first to return after the ten minute countdown, likely because Tansy was never very punctual, her mind always let her stray a little out of the boundaries of time. She did show up, half a minute later nearly fumbling over herself, holding a pawful of . . . whatever it was that she found. Shuffling up to the seats that sat closest to the cauldron, they both peered down in to the semi-calm reflection of themselves, before Iroi looked back at Tansy.

"Okay, we through one pieces in, and whoever makes the most action wins, got it?" the little pink kittom said, before lifting a paw, holding up a manaberry high, and slapping it in to the mixture.

The response was lukewarm at best, but she figured she'd go easy on it.

"Well, that was a bit of a waste," Iroi replied, before making a little pursed-mouth face, looking at his little companion and their hoard of items. With a soft little "Pomu," the behatted creature gave what looked like normal handful of grass to his companion, with a happy little smile on it's face. With a soft swing, it went in to the punch, also.

The liquid siz z l e d a little, making the previously safe to drink concoction come to life a little, only for a moment, with a soft froth starting to form.

What the heck was that, that's cool.

"Guess we're playing our cards already, little buddy" was Tansy's reply, as she went and dug in her makeshift pouch, made of a large leaf she stumbled upon in the darkness. She should find a way to glow, it would make walking away from towns pretty easy here. With a flick of her paw, and a little muttered 'alas, take this,' she threw another of her secret options in to the frothy mix.

The liquid, in turn, started to burble a little, kind of like the noise you hear when you eat the thing your mom told you not to eat.

Not that that's happened to her any time soon.

For a few rounds, they continued with the back and forth, the atmosphere working up a fever pitch, with growing calls of their ingredients flying between them as they traded-off chances to make the 'punch' go.

In the excitement, Iroi had started lifting his pomu to join in on the fun, it's little paws flinging in ingredients as the kittoms giggled and joked between them.

Finally, it was his turn again, and the little glow-bug looked at his companion, giving him the nod. It was almost a given that they had found some mushrooms to add in to the pot - a couple had already been dropped in, but this was their pièce de résistance, a large mushroom that glowed almost as strongly as Iroi did, the pomu hefting it over it's head before making a tiny little pomu-cackle as it cast it in to the pot.

At first, nothing happened.

"Little anti-climatic, wasn't it?" Tansy thought, leaning towards the pot at the same time her companions did.

Then it began, almost from the belly of the iron beast, a rumble that began under their paws, murmuring loudly as the calm fizz that had come over it started burbling angrily, like a threat of something to come. Come, it did, suddenly, the angry reaction to a pair of silly children's attempt at science, bubbles and sizzling and constant building, as if the froth was trying to touch the heavens.

At chance, Iroi had rushed to pull his companion away, the little pomu giving such a puzzled, and excited look as it was whipped away from the caution.

The Cauldron continued to rumble angrily, which finally alerted the adult elnin around them, with shouts and a dizzying cacophony of movement before the lid was cut from it's hover overtop, slapping down and nearly silencing the monster.

It took short time after for the ghost-of-the-drink finally settled, and the adults took up the space to figure out what could have happened to make it so angry. The culprits, on the other hand, had run off back in to the crowd so they couldn't be found out.

Catching their breaths, the little goth looked to her new friend.

It was the beginnings of a new friendship, and she had someone she had to tell this story to. 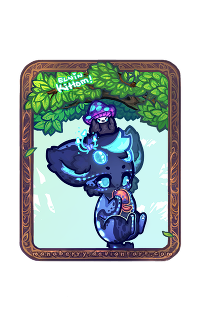 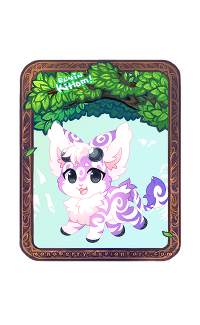