You'd think Strynhalde couldn't get any colder, but as winter encroached, as the snow grew deeper and the miasma thicker, every little bit of warmth was a blessing and a kindness. With ice clinging to the eaves of buildings and the low spots in the streets, even the spots that weren't buried in snow were treacherous. But the folk that lived here were used to it, even their eldertree constantly blanketed in snow and hung with ice.

Didn't make it any easier for the elnin to get around when the snow was drifted several feet deep, though.

Here in the kitchen, it was easy to forget the chill next to the crackling hearth and the creaking stove. Manadh considered the recipe he'd found tucked into one of the books he'd been poking through recently, apparently forgotten as a place-marker in some age past. He'd gathered everything it asked for, so he should be ready. Probably. It was terribly vague in places...

Well he wasn't going to get anything done sitting here and fretting, that's for sure. One last bit of nervous grooming to his tail, and then the little elnin stood up, stretched... and then twisted up onto a somewhat shaky two-footed stance. He could feel things changing, his forelegs shifting slightly, his neck resting at a different angle, and most importantly his forepaws becoming more dexterous, his toes becoming fingers.

This was so weird. He didn't feel any different, but at the same time, it felt so intensely strange.

A few moments spent wandering around the kitchen, making certain not only of his ingredients and tools but also his balance, and then Manadh pushed a stool over to the stove and its gently steaming pot of apple cider. A nice enough drink on its own, but this recipe he'd found promised to make it even better, especially with the wind hissing snow against the windows. First, the spices: a stick of cinnamon, a dusting of nutmeg, and the incredibly precise measurement of "a handful" of cloves. Hm, his hands were probably smaller than whoever'd written this recipe, now that he thought about it. Better make it two.

Snuffling happily at the zing of the spices lingering in his senses, he turned to the other ingredients. First the dark, sticky sugar, packing it down into its little measuring cup with his fingers. Such wondrous things, fingers. He found himself distracted by them, absently licking residual sugar from the tips as the measured amount sank into the cider.

Right, that's enough of that, he wasn't done yet, and this next bit was the trickiest part. Not because of any delicate procedures or intricate tools, but because the recipe's author had used the most unhelpful terms. What even was a 'schlorp' anyway? He'd never seen any measurement using that term anywhere in the entire kitchen!

Maybe it's the sound? Like a glug, or a gurgle, or a plop.

As good an idea as any, he supposed. Ah well, this was an experiment anyway. And so, he dashed a bit of lemon juice into the mixture, followed by a bit of brandy as well. He wasn't too sure about that last bit, he didn't care for the smell of the stuff by itself, but the recipe seemed to suggest it'd work out. And with such a small amount, it probably wouldn't be overpowering...

Actually, now that he considered the mixture on the stove, he could smell the alcohol beginning to cook off even this soon. Hmm.

But now he had to wait. This was supposed to take hours, practically the whole day of just simmering away untouched. He knew already he'd be checking it constantly.

Oh and as the day crawled on it made the kitchen smell so wonderful. The whole house, even! By the time he judged it was done and tugged the pot just that bit further away from the heat, there was a small crowd of curious folk clustered nearby; some peeking around the doorway, others simply wandering by to see what was going on, a few even lurking right near the feet of the stove and fussing was it done yet?

And, as the sun drifted behind the horizon, setting the snow-covered branches of the eldertree to glittering, and he sat on the porch with his steaming mug in his hands, Manadh smiled, warmed in ways that had nothing to do with the scarf and the coat he wore. 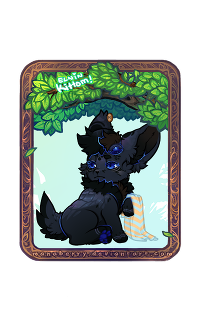