The seasons were starting to shift, the regions feeling the oncoming miasma that would waft in through the latest months. Kittoms would snuggle into the shelter to shield against the deadly mists that would blanket the whole of Eyre. Amaterasu remembered being so uncomfortable, nestled against his mother in those days. He itched to adventure more, but he knew that if he did, they both would fall ill quite quickly. Nether was more suitable to sustain herself against any corruption, but the sickness she already bore would possibly make it worse.

Now, Amaterasu could probably venture out into the mists for a short time and be alright, but it was still safer to stay inside and hunker down. His shop was never closed however to those who wished to venture into the unknown with the risks of the miasma. They still needed food and supplies. Instead of opening his shop window and serving those sitting outside, he would open his home so they could sit comfortably inside and feel safe. Narsius would be around more and unable to travel for his wares, often helping around the house.

It was nearly time to close the shop so Amaterasu could arrange his house for indoor seating without guests being too personal. After all, work and home were separate.

First things first were dusting as he went around each room, meticulously wiping every surface of dust, even rooms that wouldn't be used by guests. It had been a while since the house was deeply clean and he wanted to start out fresh before they would hunker down for a few months. Narsius was helping as well, doing things first with Ammy going over to make sure every nook and cranny had been wiped down.

Next was moving the furniture around, making room for an extra table or two to be moved into the dining area in case capacity was high one day. Occasionally there were quite a few individuals who looked after Ammy's cooking and wares, so he made sure there was plenty of seating to go around. He was sure there wouldn't be any problems with the room though, so he was satisfied with the arrangement. Narsius seemed just as happy and comfortable with it as well.

"I suppose we should get to work on setting the rest of it up, hm?" asked Amaterasu, hoping Narsius would bring the sign-in for a new face.

"Sure, I'll get the rest of the stuff outside moved in as well. I'm sure you have a lot to make this afternoon," Narsius replied, moving toward the door.

With that, Amaterasu set to work on prepping up ingredients for meals he planned on cooking that day. Cutting up everything was first before putting the pots to boil and the oven on high. He flowed through the kitchen as if in a trance, concentrating on every little detail of his recipes. Narsius brought in most of the outside furniture and set it off to storage for the season while brushing off the sign to redraw a message.

"Think we'll get anyone soon?" Narsius asked, wiping his brow with his forearm so as to not get chalk on his face. He watched his husband pour in the vegetables into the pots.

"Maybe, I just want to be sure. I also want to gift some to those with kittoms," he replied after a few moments, wiping his hands on his apron. "I know how it is to be locked up inside. I think a few treats will cheer their spirits."

Narsius smiled at the thought and continued to put the sign outside for any passersby.

Hours passed and Amaterasu finally took a break, sipping some cold tea. Most of the hot meals were ready in case anyone decided to come inside the little shop. Narsius had finished up setting the wares out as well on the inside including the register. He relaxed in the living room to the side, keeping himself busy until needed.

"Love, could you help me wrap some of these cookies?" Amaterasu asked, fishing out a few bags in a cupboard. Narsius poked his head out of the threshold of the room before walking into the kitchen to help Ammy organize little gifts of cookies. He'd tie off any bags that were handed off to him and set them aside into a large basket.

"Thank you, I think I'll deliver them now," Amaterasu said, slinging the basket onto his hip.

"Now? You sure?" Narsius inquired, looking a little concerned.

"Yeah, it will only take half an hour or so. Think you can keep the shop intact?" Ammy teased while he swung around the counter.

Narsius smiled and nodded. "I'll keep down the fort, see you in a little bit."

With that, Amaterasu was out the door and down the cobbled road toward the town. The flowers still looked lovely despite the temperatures getting colder and the rain encroaching more and more every day. The scent of honeysuckle was still nearly dizzying when stepping outside into the street.

For a while, the noble elnin knocked on a few doors to offer treats to kittoms that seemed a little annoyed by the coming days of miasma. They were eager to take his cookies with a thank you and ran into their homes to eat them. It put a smile on his face every time. He would wander around for a while until the basket was nearly empty. By then, the clouds had shifted overhead and he knew it was time to head home. Faerindell would soon be overcome with rain.

Amaterasu enjoyed the last few streets where trees bare of flowers loomed over in stark shadows against the remaining sunlight. The only blooms left were the snaking vines of wisteria crawling up the sides of stone houses. Soon he was out and close to his own house, which was more green than anything. All of the colors would return the next season.

"I'm home!" Ammy bellowed as he walked into the house, setting the basket on the counter next to the register. It seemed it was quiet the entire time he was gone.

"Welcome home," Narsius called from the other room. He would greet his husband in the kitchen and help with the rest of the duties until they were both tired and ready for rest.

The shop was ready for the travelers for the miasma season. 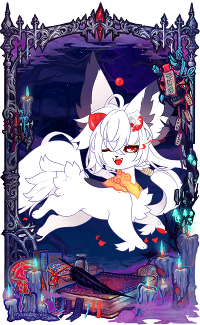 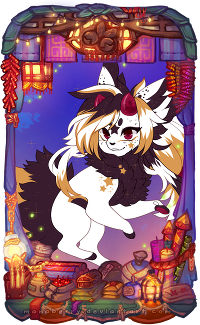