It was really unfortunate.  Maybe not to anyone else who would have had to deal with the aftermath of a kittom getting taken by the miasma, but it was unfortunate in the mind of the kittom themselves.  Xsaiavri had been holed up in Termina for the whole prior season, and while they were hoping to have seen more than dust, sand, rock, and bones, that wasn’t really the case; they were kept quite safe by their mentor, even in the desolate outpost.

But Xsaiavri wanted to see the miasma!  They wanted to see what it did, they wanted to experiment, they wanted to see if all the horror stories were true, or if it was just fascinating and everyone was just afraid of the unknown.  Their mentor told them that they were still young, and still in training; they needed patience, skill, and experience before facing one of the more prominent dangers known in this world.  A begrudging agreement came from the kittom, they knew it was true, even though they didn’t want to admit it.  Since the start of their travels in Ahza, there was so much they didn’t know about survival in the desert.  Of course, they’ve learned a lot since then, but… it was still something of a reality check that all those bones left in the swirling, windblown sands weren’t just for show.  It could be deadly out there if one wasn’t prepared.

So since the miasma season had passed, it was time to tidy things up.  It was their mentor’s idea of course, ‘Go out and help with the cleanup.  I know it sounds boring, but maybe you’ll find something interesting out there when helping to clear the paths and move some rubble.  Who knows what could be buried in the sands~’ Thus, here they were.  Out in the wastes of Termina and the desert surrounds, Xsaiavri was pushing back sand and stone off of sandbrick paths, and hoping to find something interesting underneath.

Honestly, the place really needed some cleaning.  And more than that too; it was definitely pretty barebones compared to other places they’d been, lots of the stalls and even some roofs were only covered by old, tattered cloth.  Battered wood and stone was most of what held anything together, and any sandstorms coming through here were pretty relentless, were it not for the more secured underground basements used for supplies that couldn’t take the arid sun.  It was more like an outpost than anything, in Xsaiavri’s opinion.  Really, it could do with some more protection.

Xsaiavri definitely wasn’t the strongest, but they had an idea.  While cleaning paths and walkways, they started collecting and pushing any stray stones and bones that they could manage, all over to one spot, outside of the ‘town’ of Termina.  Of course, they were also keeping a keen eye out for anything interesting that might’ve been buried, and they kept some of the smaller, smoother bones and stones in a little bag for themselves.  But they had decided that maybe they could move a bunch of this debris in place to make something of a barrier for Termina.  Cleaning and protecting; two birds with one stone, right?

So for a quite while, they did this.  Pushing big rocks (for a kittom) over to their little line of debris, dragging over bones to try and ‘reinforce’ the stones, ending up with… a not very tall, somewhat unimpressive line of rocks, skeletal remains, and other debris.  Unfortunate.  They were hot and tired and Xsaiavri didn’t even find anything yet.  This was hardly any kind of barrier!  They were still too weak and small… after all that work too!  While they sat there huffing and taking a break, they noticed that several other elnin had taken interest in what they were doing.

Most of the denizens here were relatively quiet, at least to Xsaiavri.  And this wasn’t much of an exception.  … But even without any verbal explanation, it seemed they understood what Xsaiavri was trying to do.  So, while carrying out their own cleaning efforts, other elnin started to add to the line of stones, some being able to move much larger rocks than Xsaiavri ever could.  When the kittom didn’t whine about the addition of more “materials”, those elnin began moving what rocks and splintered bones that had gotten where they shouldn’t be back outside the settlement, and added to the line.  Slowly, something more and more like a barrier was taking shape.

In reality, with its current state, it probably wouldn’t have protected from much, but could be a start!  Obviously all the right materials had to be gathered before any real sort of construction could be done, right?  Maybe they could do something after all…!  Xsaiavri was so excited that others had decided to help too, it inspired them to keep going after a bit of a rest.  The line grew, with bones placed nearer the village and rocks placed on the outer side of the line.  Several of the other, older elnin couldn’t help but grin seeing how just adding to this string of rubble made the black and gold kittom so happy.  While Xsaiavri was pushing more rocks, and dragging more bones, they’d stop and thank anyone they saw close by adding to the long mound.  And in turn, they’d get thanks back, for helping to clean up their little settlement.

After they were too tired to continue, Xsaiavri wasn’t disappointed anymore.   Even if it wasn’t some exciting miasmic adventure, the kittom definitely had some fun helping out in the end. 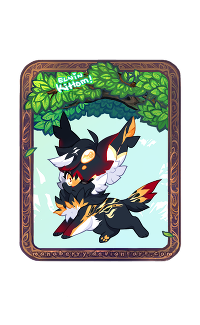