Please do let me know if I did something wrong!
I am so sorry if this is to late to review >w<

Riley is setting up a simple board game in her living room for her precious baby boys to play. She really doesn't want them going outside today due to the time of year. Turning she looks out the window at Enmir which she has called home for as long as she can remember.

She sees the mossy trees and the fireflies lighting up the shadows of the darker swamp like forests. The thickly packed trees with their branches reaching upwards and creating a canopy of moss and drooping leaves. Turning her head slightly she gazes at the algae coated river and the pond within her yard. A frog jumps into the placid waters sending small ripples throughout and startling a dragon fly. It flies over the wooden bridge that connects her home with the rest of the deep forest.

Sighing she turns and continues to set up the simple board game she has devised. Her white hair falling into her face when she leans over. She gently moves it to the side before pinning it back with one of her flower pins. Standing up once more the bead ties in her long white ear fluff clink together softly. Looking over her shoulder to the tea kettle that starts whistling her oddly colored eyes lock onto it. Blinking softly she walks over with a sigh turning the stove off and retrieving mugs from the cupboard.

Her two darling boys should be waking up from their nap soon so she shall make them some hot cocoa. She places the cocoa mix she had created several days ago into the cups and fills them with the now hot water from the tea kettle. Setting the kettle back onto the stove she mixes the cocoa and adds in some marshmallows that Rosemary had made for her. A thump sounds from above, looking up at the ceiling she calls out, "Raine, Sirius come down stairs now."

Riley picks up the cups and takes the steaming cocoa over to the table she has set up and sets them down at two of the chairs. It isn't long till there is the sound of tiny paws rushing down the stairs. Raine tumbles into the room Sirius falling on top of him in their rush to find out what smells so good. The two kittoms heads shoot up and Raine asks what the smell is, Sirius already taking a spot at the wooden table Riley had made when she first moved out on her own. Giggling softly she says, "It is the hot cocoa I made several days ago, I added in Rose's specially made marshmallows." Raine rushes to the table to take his seat both boys picking up their mugs and taking small sips.

Smiling to herself she walks back over to the counter and starts preparing their snack. Hearing a hoot from outside she looks back out the window at her swampy home, taking note of an owl sitting in one of the dark moss covered trees across the algae covered river. The wind blows and the wooden bridge sways on top of the water as it has grown somewhat old. Turning her attention back to the task at hand she starts putting the sandwiches together. Humming to herself Riley finishes her task quickly and with skill placing the sandwiches onto wooden plates and bringing them over to the table. She sets them down in front of her precious boys and watches as Sirius is quick to grab his up and take a bite.

Sirius's eyes light up and he almost chokes with how fast he eats his sandwich, "Slow down love," Riley softly admonishes him. The boy blushes but slows down and takes a drink of his cocoa. Riley looks over at Raine to see his sandwich gone and him eyeing the board game she had set up. "Mom what's this?" he asks her looking up at her in question and curiosity. Smiling broadly, "I made a board game for the three of us to play," she exclaims.

Sirius's eyes immediately turn to the game she has meticulously prepared his curiosity obviously peaked. "Go ahead and pick a character piece to play with," Riley says as she sets out 3 wooden characters she had carved the day prior. The little blue kittom of course reaches for the prince character while her little grey kittom reaches for the rouge character. She isn't surprised by their choices in the least Riley knows her boys so well after all, "I guess I will take the alchemist as my character."

"How do we play mom?" Sirius asks inspecting his chosen piece. Smiling Riley explains the rules, "we start on this square here [she gestures to the start point] and move along this path [she makes sure to gesture to everything as she goes]. If you land on these spots you gain these [she lifts one of the small wooden coins she made]. The amount you gain is based on the number written on the square. If you land on this space with the little house drawn on it you can buy another dice roll." Blinking Riley notices she forgot to grab the dice she stands up and goes to retrieve them from the counter.

Glancing out the window once more she gazes at the shadows of the mossy trees seeing some miasma ebb and flow. She frowns but knows it cannot come too close thanks to the charms she has upon her home and property. Turning she walks back over to the table with the dice sitting down once more. The boys having finished their cocoa and sandwiches in the meantime. Riley smiles fondly at them as she sets down the dice next to the board the boys had been inspecting.

Picking back up where she left off, "You roll these dice to see how many spaces you can move. These red spaces are penalty spaces if you land on them you skip over your next turn. [Sirius makes a face at that] The first one to this end square wins the game," She finishes her explanation with a flourish. Raine's eyes light up at the prospect of proving himself better than the mud ball. "I shall win this no problem," he exclaims in complete confidence! Sirius glares over at him, "no I will," he exclaims. "Boys please calm down this is truly just for fun," she sighs in exasperation.

Sirius lets a devious grin spread across his face as an idea comes to his mind. "Well how about the loser jumps in the swamp?" he says knowing how much of a clean freak Raine is. Raine gasps in horror at the very thought of getting covered in what ever gross things float in Enmir's waters. "Ha, I knew you were to chicken," the grey kit exclaims in triumph. The blue kit frowns and sets his jaw before exclaiming, "your on!"

Riley looks back and forth between her boys and sighs, she should have known this would have happened. Hopefully they can get through the game without any true incidents or Sirius dunking Raine in the swamp. 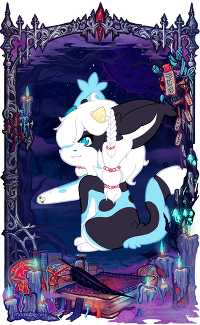 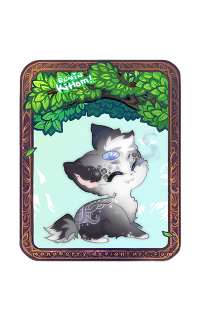 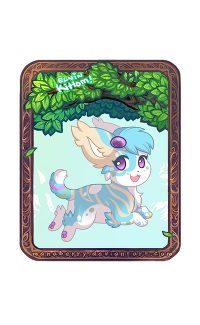