The sunlight filtered down gently through a gap in the towering mangrove trees and slowly inched its way over to the curled, sleeping form nestled in the crook of an enormous root. The kittom sighed in her sleep, a tidepool-patterned ear twitched, and finally the sunbeam crossed over the root to gently rouse the kittom from slumber.

Thalassa stretched out and yawned, then rubbed her eyes awake. She blinked her teal eyes a few times before standing up, stretching her back legs, then hopping off the giant nest of roots weaving across the ground. She hadn’t meant to lay down for a nap while she was out exploring the enormous mangrove forests of Ealei, but she was still quite young, and the midmorning air was so fresh and warm, her eyes get heavy just thinking about it.

Thalassa hopped down from the mangrove tree root and landed with a soft thud on one of the several wooden bridges that paved the way back to her home in Port Pthalo. She glanced over the edge of the bridge and into the crystal clear waters lapping peacefully below and highly considered jumping in for a swim when something glittery caught the corner of her eyes. She tilted her head as she followed the shining spot up toward its origin -- a small silver locket, swinging from a low-hanging limb on a young mangrove tree. Her eyebrows furrowed as she tilted her head a little more to the left.

“Oh? What’s that doing there?” She asked herself, taking a small step or two forward. She turned her gaze to the area around her, checking around to see if anyone else was nearby.

Nope, no one. Thalassa was very much alone here.

“That’s odd,” she said to herself, turning her gaze back up to the locket twirling gently in the breeze. “How’d that get up there?”

She hopped off the bridge and started climbing over the winding roots towards the tree, trying to keep her eyes on the locket as much as she could. She tripped only once, but ended up tumbling into the water anyway (which was wonderfully refreshing! but now her attention was focused on the Misplaced Shiny Thing™ so she crawled out rather quickly).

Thalassa climbed over to the tree where the locket swung and placed one tiny paw on the trunk. This particular tree was pretty small in comparison to the other mangroves that towered miles and miles above her, and it had started to grow crooked in order for its leaves to reach the small patch of sunlight filtering down from a gap in the tree boughs above.

“Hmm, should be able to climb that,” she muttered to herself, hopping up on the tree trunk. She sunk down low, keeping her belly to the trunk, and shimmied her way over to the branch that held the locket. Just before she reached the last branch, Thalassa stuck one foot out to test if it’d hold her weight. She gave it a little push, and it bent a little too easily for her liking. She scrunched her face. The locket was just out of reach.

Thalassa glanced down at the ground below. The wooden bridge heading towards Port Pthalo lay just a little to the side, with a wide enough stretch of clear water beside it. If she had the right angle…

Without thinking about it too much, Thalassa jumped towards the locket. The branch bowed underneath her weight, and the locket slipped free, tumbling towards the bridge. Thalassa tumbled too, twisting herself in midair, but now realizing the ground was a lot closer than it originally seemed…

She fell, and the bridge was awfully close now…

Thalassa bobbed back to the surface of the water, thankfully missing the bridge by a hair. She paddled over to a cluster of roots that dipped from the water and climbed up, hopping back onto the bridge. She trotted over to the locket, shook the water out of her fur, and leaned in to inspect her new treasure.

It was a very beautiful locket, Thalassa decided. Engraved on the front was an eye-catching starfish motif, encircled with twisting seaweed. The locket itself was silver, but almost seemed to have more of a pearlescent sheen than a metallic one, and it hung from a very delicate chain.

Thalassa’s eyes sparkled as she took in the beautify of the locket. She glanced around again to make sure she was really alone, and that the actual owner wasn’t nearby looking for it.

Nope, still no one.

Thalassa couldn’t help but smile to herself as she grabbed the locket and dangled it over one of her oversized, fluffy ears.

“Finders keepers!” She trilled to herself as she set off the wooden bridge path to her home in Port Pthalo, humming a cheery little tune as she went. 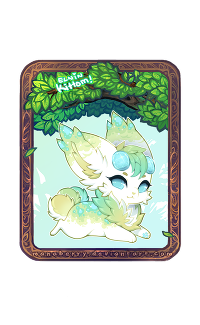