At least she enjoyed adventure.  Out on the hot, burnt orange stones and the endless waves of sand, Mithrae’ya had JUST gotten her pouch of rune stones back off a precipitous tree limb, when one of her scrolls had blown away from her, stolen by the Ahzan desert winds.  Mithrae’ya loved the Devara region, she really did, but today was just not her day for keeping her belongings together.

She quickly conveyed to her brother Cicero to ‘stay here’; she had already walked with him to the place they were supposed to meet up with their father later - a shorter, quieter waterfall that flowed into a tiered river.  Being smaller, the waterfall wasn’t very loud, and at its base was a wider, more calm pool of glistening water that had fallen from it, before it went forward and down the uneven stony ‘steps’ that made up the rest of the riverbed.  Cicero, having been staring out at the pool’s edge, hardly had a chance to protest before Mithrae’ya had run off, chasing the fluttering scroll further amidst the sand washed rocks where it had blown.  She was lucky the wind hadn’t tossed it into the river..!

It wasn’t that easy to navigate the step-like stones, sheer and angular, heading upwards into rolling sands beyond, without looking where she was going.  Eyes bouncing up and down, where she ran to where the scroll soared, was sure to get her tripped up sooner or later.  Further from the river, any brush and trees became scarce; sunset colors of orange, reddish purple shadows, golden sands and bright yellow sky, nothing blocking out the brighter sun – it all helped to make Mithrae’ya’s surrounds a blur.  But it was simply the sunlight that shone right in her eyes, after a leap up a stone, that ended with a face full of sand and a quick stop in her chase.

Blegch, it got in her mouth!  Mith made some squeaking coughs of protest, rubbing the sand out of her eyes, off her face, then quickly cleaned off some of her fur, after she spit the rest of the sand away.  At least she hadn’t face-planted into a stone or cliffside, or even worse, down into some pit of quicksand.  Did they even have quicksand pits in Devara?  It seemed almost too rocky for that...  She didn’t know; but what she did find out, to her dismay, that she had lost track of where her scroll had gone.  Heck!

Well, now that she’d stopped frantically chasing after a flying paper, she might as well look around to get her bearings some.  She’d have to head back eventually after all. . .  And maybe she could find some higher ground to look out off and see where her scroll had gone!

Mithrae’ya looked around, up and down, to see where she had ended up after all her running and jumping through the rocks.  She’d made it largely out of the river valley.  Looking down would show her the river some ways beneath her, but not something she’d be able to clearly jump into with all the step-like stones in the way.  The other side of the river valley had a much steeper, sheer and vertical cliffside.  While the ‘stony steps’ on the side of the river where she’d run away from were much smaller and more manageable - a subtle horizontal incline - the other side, though tiered as well, was a much higher straight skyward climb.  One she definitely wouldn’t have been able to get very far with, given the sheer size of the flattened boulders.  It was massive.  She didn’t like to admit defeat, but… that is one place she wouldn’t be able to climb herself.  …  Yet.

But that challenge was for another day.  Her scroll hadn’t gone up the mountain-like cliff, it’d blown further into the sandy valley’s edge, away from the river.  And while there were certainly higher places than where she’d reached, none of them seemed particularly accessible, or helpful for looking out over a distance.  So, she just kept heading in the same direction she’d been running earlier.  This time though, much slower; it was now more of a combing search than a chase, one that would probably take forever.

Mithrae’ya wasn’t about to let some rude sandy wind beat her though!  This particular scroll had been on some kind of black paper.  She didn’t know what kind, but she thought it was pretty; it was because she was admiring it, having took it out of her scroll case, that it escaped from her in the first place.  But at the very least, it should stick out a bit in contrast to the terracotta-orange stones, and brighter golden sands.  The kittom began scouring her surroundings with determination; looking around rocks, at the edges of their sheer faces to see if the page had gotten trapped between them, looking for any odd nooks or crannies that it somehow might have fallen into.  When there was the occasional sparse and leafless tree, she would peer up at it, climbing up a little ways, to see if it had gotten caught in the bare branches.

Pouting but driven to find her pretty scroll, she kept looking.  What kind of future mage would she be if she couldn’t even hold onto of her scrolls?  She’d never be a Pathfinder if she keeps this up!  She has to find it, her entire future is at stake!

And then she saw something.  There, against part of a high reaching angular cliffside, in the shadow of some tall boulders, looked like a collection of small broken trees, all dead, in a sort of strange… pile.  Not a haphazard one either, they all seemed like their branches were pointing inwards, with their trunks facing out, as though they’d been arranged for some unknown purpose.  It was certainly peculiar… and it looked too unfinished and uncomfortable to be a massive nest of any sort, nor were any propped upright as though it was meant to be a makeshift home.  But yet, there it was, this odd formation of long dead trees, causing a branchy tangle in its center.

Of course Mithrae’ya wanted to investigate!  What was that?  Who made it?  Why was it here?  Were there more like it?  Did it have some special purpose?  Was it a Pathfinder landmark of some sort?  Trotting curiously closer through the warm desert winds, Mithrae’ya found a lot of her questions and curiosities come to a quick stop; there, caught in the branches of this strange wooden circle, was something dark, fluttering and unable to break free from the branch cage that had caught it.

Her scroll!!  Or something that looked a lot like it!  More quickly now, Mithrae’ya bounded over to the circular formation, her excitement growing more and more as she closed in.  At the very least, she did take a look around before jumping in, and perked up her ears to listen for any potential dangerous tree-circle creators when she reached the outer trunks of the formation.  Nothing seemed to be around…

So quickly, she scrambled up the side of the dried out desert tree, walking her way carefully closer to the circle’s center, weaving around branches to get to where the black page fluttered against the slimmer limbs.  Luckily, she was small and light, so while the branches bent, they didn’t snap and drop her into the center of this odd tangle of tree limbs.  Luckier still, the scroll wasn’t caught all the way at the center at the trees’ most delicate point, but still a ways out, so Mithrae’ya could almost reach it from where she was on the main trunk.

With a long streeetch, the determined kittom triumphantly pawed her scroll towards her, to quickly grab and roll back up where it wouldn’t fly off again.  She did it!  All by herself!  And she’d found this weird thing on the way!

After her scroll had been secured, her little pomu popped out of her shadow holding a pen and something that looked like a half finished map.  They knew exactly what she wanted.  Giving her companion a little pat before taking the two items, Mithrae’ya was going to record this new discovery and explore a bit more before going back to her family, excited to mark down what she’d found just like a real Pathfinder! 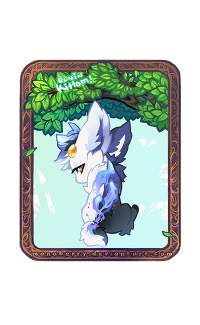 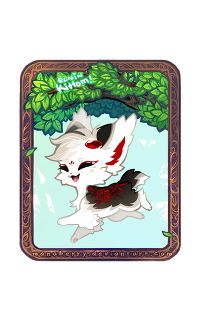